So David triumphed over the Philistine with only a sling and a stone, for he had no sword.  1 Samuel 17:50 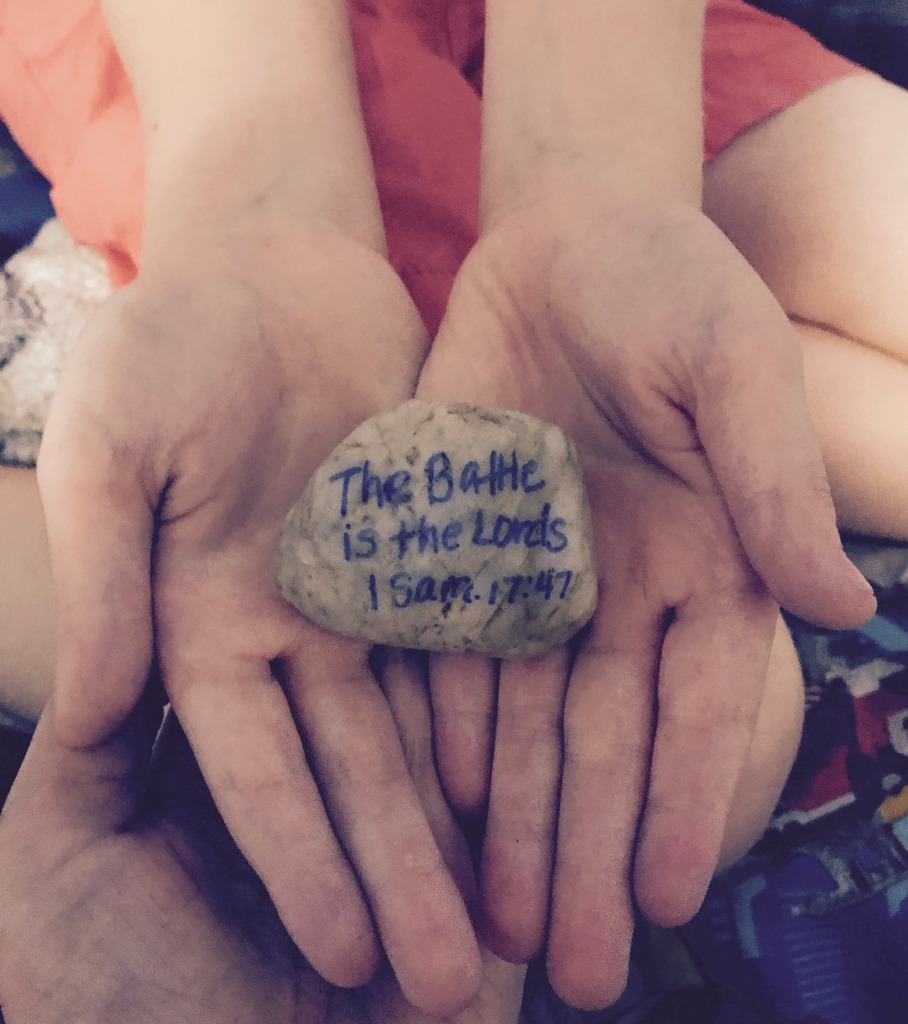 David and Goliath. One of my favorite Bible stories. Every time I read, tell, or hear this story I get excited. I am reminded of so many of God’s truths. It is a reminder to children that no matter how small or young they are they can do great things for God. It is a reminder to us that God can take down our biggest giants if we have faith. It serves as a reminder to me of each giant he has taken down for me time and time again in my own life.

During my quiet time a passage of the story of David’s battle with Goliath was part of my daily reading of God’s word. As I read the words David spoke to Goliath as he prepared for battle, I began to feel the excitement all over again. The hope and promise that even kids can do great things! Those past giants that were conquered! All those future giants that will be!

And, then I began to think of my little boy’s giant. That giant called school. The one that had him not wanting to grab his own basket at back to school night. Sort his supplies. Look his teacher in the eye. The one who screamed when a simple question was asked about a kid in his class. Who cried and pulled his hair when his locker wouldn’t open. Who dreads the first day of school weeks before the actual day.

His Goliath was real, and the poor little guy’s plan of attack was grunts, kicks, and screams that were now becoming this family’s giant.

And everyone assembled here will know that the Lord rescues his people, but not with sword and spear. This is the Lord’s battle, and he will give you to us! 1 Samuel 17:47

God had now told me exactly what to do.

My favorite story was now our new plan of attack to tackle our back to school Goliath.

So, as I put the little guy to bed I read him the story. It’s a story he had heard before. As he so quickly told me. He’s a PK (pastor’s kid). He’s heard them ALL before. He is also usually the one up front telling his momma exactly how to relay the story. While his momma threatens to send him out.

“But Hunter, I am reading only part of it. The part where David kills Goliath.”

Well, at least we agree! And, so for a time…he is at ease. And, while he does slightly critique me as I read (tell me I am doing it wrong, ask me why my version is different, refer to the exact age of David when I refer to him as a “boy.”), he is completely open to the message. Which is all I really asked for.

And, as I finished the story and prayed to God to give me the right words to say to my son who does not understand metaphors (black and white thinking, here folks), he asked me,  “What does this have to do with school? Is it like my giant or something?”

So, in his hand, I placed a stone. On the stone were written the words: “The Battle is the Lord’s.” I explained that David defeated Goliath with one stone, and Hunter could defeat his anxiety with one stone. He would take it in his backpack to school as a reminder that if he felt anxious, he could bow his head and repeat those words to himself: “The Battle is the Lord’s.”

I had no idea what would happen when I placed that stone in his tiny hands. I figured what I would get would be a perplexed look, and a grunt. Instead, that little boy took out his Bible, searched for the scripture reference I had written under those words, and underlined those same words in it. He then bowed his head and repeated them: “The Battle is the Lord’s.”

God had given me the message and the words to say, and He had given that little boy an open heart to receive it.

We all face a number of Goliath’s. A number of challenges. Some are big. Some are small. Some are visible. And some are hidden.

But we are never sent out for battle alone. God is fighting with us and for us each step of the way.

Autism and Faith, How Is Your Faith
1 Samuel 17:47, anxiety, ASD, asperger’s, autism, back to school, Comfort, david and goliath, faith, Fear